Just a cup of tea

Tea is that one thing everyone loves to have but can it be so special for someone that he can wait for just that special cup for years. A narrative journey of Ghulam Raees (Rashid Farooqi) who takes us back in time where he used to work at the tea store of Ahmedeen (Qazi Wajid) and they both used to enjoy tea together. Who made that special tea, why was it so special to both the characters is the story that unfolds with beautiful visuals and engaging music of Bas Ek Piyali Chai.

Born in 1990, Muhammad Belaal Imran is a graduate of film studies from Iqra University Karachi.
Completing his studies in 2017 and making his mark in the industry came side by side with the award winning travel film Arz-e-Pakistan which brought him credit as a cinematographer on international level for Pakistan from various countries like Turkey, Germany, Spain and India being the top ones crediting the master piece. Having a dream to shoot and produce content for a family oriented audience inspired him to write for his own projects that are ready to make a mark in film festivals. Nanu or Main ( Grandfather and me) and Bas Ek Piyali Chai (Just a cup of tea) are the most recent works that Belaal has written himself. Being a filmmaker and visually inspired person he decided to shoot and write a short film “Nanu or Main” directed by Ali Sohail Jaura who believes that he did justice to his vision. Family Films being the production house he started with his friends is doing great as a company which produced all the great work Belaal has done with his amazing team. “We all have our talents and skills its just the perfect amount of polish we need to apply for making them shine” says Belaal.

Pahuna is the story of 3 children facing extraordinary circumstances. The emotion transcends barriers of language and geography.

Paakhi A Tyrewala is a writer turned director from the Indian Film Industry. Having started her career in films as a child artist at a young age of two and a half years age, deep in heart she knew she belonged to the cinema. She has been through a long and interesting journey of exploring various departments in the industry while being behind as well as in front of the camera. Her first shot at direction was a song she directed in ‘Jaane Tu Ya Jaane Na’. Recently, she has been in the news for the success of her directorial short ‘Kajal’ – a film about Women’s right to be. The film had its world premiere at the New York Indian Film Festival and later had an Indian premiere in Mumbai. Kajal won the ‘Best Film’ & the ‘Best Music’ award at Feedback Female Film Festival held in Canada, it also won the ‘Best Actress’ award at the Banglore Shorts Film Festival.

Based on a true-ish story, it’s Omar’s first day playing a terrorist when an actual ISIS terrorist takes over the film set, leaving Omar to save the crew. If only they could tell him apart from the actual terrorist.

Since travelling to New York International Film Festival with his graduate film Origami he has written, produced and directed a number of independent productions including Damaged (Winner Best Director – Bare Bones) and mockumentary Don’t Panic! I’m Islamic. In 2013 he co-produced indie feature 500 Miles (Winner Best Narrative Cincinnati Film Festival – released on DVD/VOD). He is currently in the midst of writing and starring in his own series titled ‘Mustafa Needs a Wife’.

What does one do at fourteen, fifteen years old when family members start pressuring in order to accept an arranged marriage? Can one refuse? What are the consequences? Is there a risk of life? Forced marriages do exist in Quebec and teenagers often are the victims. Hopefully, trained personnel can more adequately give help to those in need. 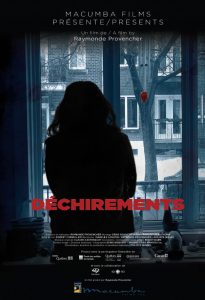 Raymonde Provencher holds a degree in political science and has been working in the international news sector for over thirty years. In 1983, she was part of the small group that created the program Nord-Sud for Télé-Québec. The program had a significant impact due to its relevance and world view. In 1995, she teamed up with her colleagues Patricio Henriquez and Robert Cornellier to found Macumba International, a private production company that afforded her the opportunity to work concurrently as a director and producer. In addition to the series eXtremis and the film WAR BABIES (2002), which both won several Gémeaux awards, her credits include BLUE HELMETS: PEACE AND DISHONOUR (2007), A SENSELESS DEATH (2008) and GRACE, LUCY, MILLIE: CHILD SOLDIERS, her latest documentary, co-produced with the NFB. (1/11)

There’s much talk about the language of love — the beauty, the poesy, the intricacy and the eloquence. But what if the real romance rested between the lines, in pages and moments that pass you by? And what if you learned one day that you could read it all? Soak in the joy, taste the eloquence, breathe in the intricacies and feel the poesy reverberating in the air. But what if you could only sense, only feel and yet do nothing else? A first-of-its-kind silent LGBTQ film in India, Sisak makes waves before the visuals of this short hit the shore. Set in the fast-paced environs of the usually bustling Mumbai local train system, it details a romance that develops slowly and intoxicatingly, nestled in the silences and quiet comforts of the end-of-day train journeys.

Faraz Arif Ansari started his film career as a co-writer with Mr. Amole Gupte (Writer & Creative Director of ‘Taare Zameen Par’ or ‘Stars on Earth’) Faraz was the Associate Director, Casting Director & Executive Producer on Fox Star’s ‘Stanley Ka Dabba’, released in May, 2011. He directed & choreographed a two hours concert with 500 children of Besant Montessori, Juhu which was used as the climax song of ‘Stanley Ka Dabba’ Faraz has been the Associate Director on many TVCs directed by Amole Gupte for major brans like Nestle Cadbury’s, etc.

NUDE is the story of a poor woman who comes to Mumbai with her son to escape an abusive, adulterous husband in her hometown. After struggling to find work in the big city, Yamuna lands a job as a nude model for art students at the prestigious Sir J J School of Art. The film is based on a true story but the identities of the actual individuals involved have been kept secret, as a written statement from Jadhav on screen testifies at the start, “in keeping with our commitment to the school’s protocol and related sensitivities”.